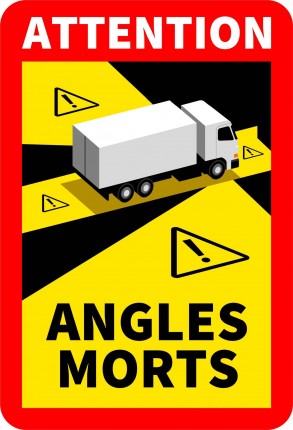 Specification: 270x270mm backing paper, 250x250mm, foil label placed in the middle of the backing paper, 1cm foil edge all around, not weeded, for better handling at the loading point.

Print size: 17x25cm according to specifications

Angles Morts / Blind Spot:
Since January 1st, 2021, France has required an additional marking for vehicles over 3.5 tons and buses to warn of the so-called "blind spot" / ANGLES MORTS. This new French regulation was published by provisional decree on November 19th, 2020 and is valid from January 1st, 2021! Anyone who violates the new obligation must expect a fourth class fine in the future, i.e. H. 750 euros. There is a transition period for the first 12 months. During this time, truck drivers whose vehicles are provided with side and rear stickers with information about the blind spot, but which do not strictly comply with the new standards, should not be penalized.

ALL vehicles> 3.5 tons are named in the decree. Thus, mobile homes, for example, are also meant here.